Stachybotrys is a greenish black mould that grows on substrates with a high cellulose content and a low nitrogen content such as hay, straw, wicker and wood chips, as well as building materials such as ceiling tile, drywall, paper vapour barriers, wallpaper, insulation backing, cardboard boxes, paper files, fiberboard, the paper covering of gypsum wallboard, particleboard, jute, dust and wood when these items become water damaged.

This mould requires very wet or high humid conditions lasting days or weeks in order to grow. Most mould spores are able to begin growth after just 24 hours of wetness, whereas Stachybotrys spores require at least 48 hours of sustained wetness to germinate and commence growing.

Because Stachybotrys spores are rarely airborne, it is more often identified by laboratory analysis of direct swabs or lift tape samples than by air sampling. Due to this fact, low level of airborne spores provide a modest indication of water ingress or leaking.

Although Stachybotrys is only one of the fungal genera isolated in mouldy buildings and, in fact, is less common in the air and in lesser amounts compared to other mould genera, the presence of Stachybotrys and its mycotoxins on building materials have interested health professionals for many reasons. One of these is their possible role in the development of sick building syndrome, especially since this mould is one of the key contaminants infesting buildings shown to have major problems in mechanical system design, construction and/or operational strategies, leading to excess indoor moisture.

When active and growing in a wet environment, Stachybotrys can appear black, shiny and slimy; when it dries out it takes on a powdery or sooty appearance. 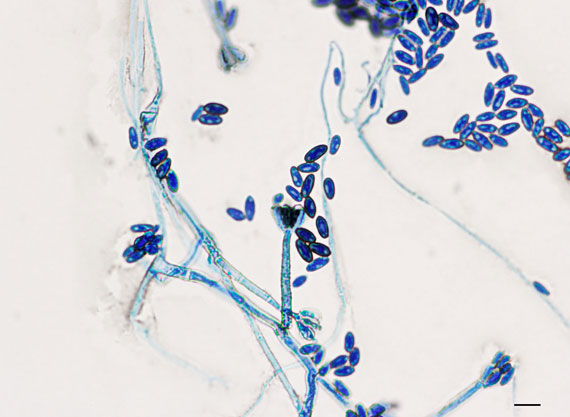 Infants under one year old are most at risk if they breathe high levels of Stachybotrys spores for long periods of time. Stachybotrys has been linked to a very rare condition called “pulmonary hemosiderosis” (bleeding of the lungs) in infants from extremely contaminated dwellings. This condition can only occur in the developing lungs of infants, and it does not occur in anyone else. However, other people may develop more general health effects, like eye irritations, asthma aggravation, cold-like symptoms, rashes, headaches, fatigue.

Following Stachybotrys exposure, the main symptoms described are mainly respiratory and cutaneous irritation at the site of contact with the toxic material {811}. Following direct contact with this mould, primary disease manifestations may appear on skin, with dermatitis. Lesions progress to crusting exudates and ultimately necrosis.

Current data on the toxicology of mycotoxins produced by Stachybotrys demonstrate that this group of mycotoxins is capable of producing immunosuppression and inflammatory insults to gastrointestinal and pulmonary systems. Trichothecenes are among the most potent small-molecule inhibitors of protein synthesis and have been associated with decreased resistance to infectious organisms.