Absidia is of particular interest as this species can be found in the indoor environment and is linked to many adverse health effects.

Absidia corymbifera is ubiquitous and is considered common to the indoor environment.  Absidia is found worldwide in soil and decaying organic matter (plant material/compost). Often found in stored grains and other foods. In indoor environments, it has been isolated from carpet and mattress dust, potted plant soil and bird droppings.

They often cause food spoilage like on decaying vegetables in cold storage and on mouldy bread.

Colonies mature rapidly and resemble coarse, gray wool or cotton candy. The reverse is white or light gray. Absidia can grow very rapidly and releasing large numbers of spores even in cold storage. growing more rapidly at 37 °C than at 25 °C. Its’ maximum growth temperature is as high as 48 to 52 °C  however the growth of A. corymbifera is optimum at 35-37°C, at a pH value of 3.0 to 8.0.

The minimum aw for spore germination and growth for A. corymbifera is 0.88. 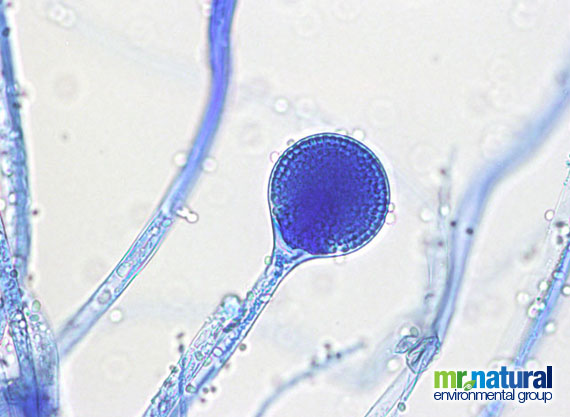 The genus Absidia currently contains 21 species. The most commonly isolated species is Absidia corymbifera. It is the only recognized pathogen among the other Absidia species.

Absidia is considered toxinogenic fungi classified as an “advanced deterioration fungi” that normally do not infest intact grains but easily attack damaged ones and require high moisure content. The build-up of toxics contaminate food infecting hosts through digestion. 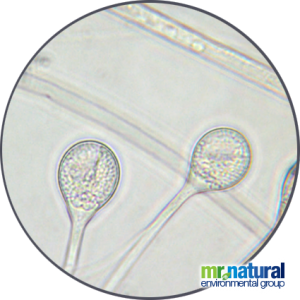 Absidia is allergenic that could cause mucorosis in individuals with low immunity. Most people come into contact with this fungal species regularly and it poses no health concern. If this fungus breeds infection, it can be a serious and potentially life-threatening fungal infection. It typically affects the face or oropharyngeal (nose/mouth) cavity, but it can also infect the lungs, nose, brain, eyesight and skin.

The zygomycetes, like the Candida species, are ubiquitous and rarely cause disease in an immunocompetent host. Some characteristic underlying conditions which cause susceptibility are: diabetes, severe burns, immunosuppression or intravenous drug use.

Another common health effect of Absidia species, is Rhinocerebral infections. This disease is frequently seen in the uncontrolled diabetic.