Includes about 40 species naturally found in soil, on decaying plant material and as plant pathogens; several studies conducted in Europe and North America have shown that Cladosporium spores are present in the outdoor environment throughout the year. However, concentrations are very low in winter. In summer, daily peaks may range from 2,000 to 50,000 spores per cubic meter of air. Concentrations of Cladosporium species in indoor air is influenced by outdoor concentrations and indoor growth sources.

Cladosporium spp. grows and sporulates on general fungal media, may need 8-20 days for fruiting body production and sporulation. It will grow optimally within a temperature range of 18-28 °C ; however, for certain species, growth is also possible below 0°C. Most Cladosporium species can grow at 30-35 °C, but do not grow above 35-37°C.

Available water (Aw) requirements are between 0.85 and 0.88 for both species described herein. Both grow well on all general fungal media.

C. cladosporioides is considered to be xerophilic, xerotolerant but also psychrophylic, as demonstrated by its ability to grow at freezing temperatures; it can grow at a slower pace at temperatures between -10°C and -3°C.

C. herbarum also has the ability to grow on frozen substratum.

Colonies are rather slow growing, mostly olivaceous-brown to blackish brown but also sometimes grey, buff or brown, suede-like to floccose, often becoming powdery due to the production of abundant conidia. Vegetative hyphae, conidiophores, and conidia are equally pigmented. Conidiophores are more or less distinct from the vegetative hyphae, are erect, straight or flexuous, unbranched or branched only in the apical region, with geniculate sympodial elongation in some species. Conidia are 1- to 4-celled, smooth, verrucose or echinulate, with a distinct dark hilum and are produced in branched acropetal chains. The term blastocatenate is often used to describe chains of conidia where the youngest conidium is at the apical or distal end of the chain. Note that the conidia closest to the conidiophore and where the chains branch are usually “shield-shaped.” 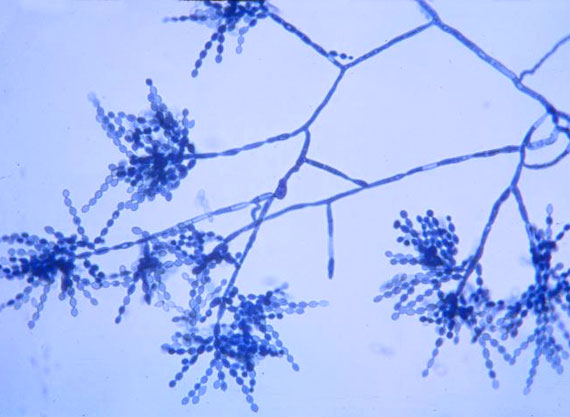 No human or animal mycotoxicosis associated with Cladosporium sp. has been reported.

Cladosporium is considered to be allergenic and can lead to sinusitis and pulmonary infections; C. cladosporioides reported from a cutaneous infection in an immunosuppressed patient. According to the MayoClinic, its various strains are some of the most common allergenic molds.

Some twelve fractions of C. herbarum have been studied and classified; eight of these fractions are part of the official allergen list of the World Health Organisation and International Union of Immunological Societies.  One C. cladosporioides allergenic fraction has also been registered.