Chaetomium is the species everyone refers to as ‘Black Mold‘.

In indoor environment, isolates of Chaetomium were reported found in house dust, growing on damp building materials containing cellulose-based materials (such as wood, wallpaper and cardboard) affected by leaking water; Chaetomium is reported as one of the most frequent fungal genus in those conditions, often ranking in third position after Penicillium spp. and Aspergillus spp.

On artificially infested building materials, Chaetomium’s development is very fast, covering the surface with substantial growth after two weeks. However, since the spores are cemented together by mucilage and are also trapped by hairs, few become airborne until the mould has completely dried out or is mechanically disturbed during renovations or mould remediation. It is, therefore, not uncommon to find low Chaetomium spore counts in pre-remediation air samples and relatively higher counts in post-remediation samples.

When dealing with indoor contamination, in particular when dealing with cases of sick building syndrome related fungi, fumigation treatment with chloride dioxide has some fungicidal effects on Chaetomium, but strains of this species appeared to be more resistant than Stachybotrys chartarum and Penicillium chrysogenum. Hydroxyls and air scrubbing have shown to be the most effective means to knock down and deactivate spore levels.

Chaetomium has been found on paper in sheetrock. When this mold is found indoors, the site should be considered a wet condition, which means that other molds may be present. It may be found on wet drywall, wall-paper, carpets, window frames, baseboards and plywood. This mold causes many problems of biodeterioration of paper and other cellulose-containing material, including paper, cardboards and plant compost.

Some Chaetomium grow well between 16 and 25°C, and most species grow best between 25 and 35°C. A few species being thermotolerant or thermophilic; those that have been reported to cause invasive human diseases grow also well between 35 and 37°C.

According to the optimal growth temperature when cultivated on Malt Agar with 2% yeast extract, one can distinguish several groups of Chaetomium: mesophilic (15 35°C), semi-mesophilic (15-37°C), microthermophilic (15-40°C), thermotolerant (15 45°C) and thermophilic (25-55°C).

The thermal point of mortality of the species C. globosum is of 55-57°C. On the other hand, ascospores are even more resistant to environmental conditions: they can survive at 60°C for 60 minutes. In vitro, on Sabouraud Agar medium, they show a slight heat resistance, surviving at 60°C for 60 minutes, but not at 70°C for 10 minutes as other soilborne microfungi can. Their ascospores may germinate at temperatures in the 4-10°C to 38°C range, optimally at 24-28°

C.globosumwill grow best at a pH between 7.1 and 10.4, but may also grow at pH of 3.5 to 11. Chaetomiumsp. requires a water activity (Aw – available water) higher than 0.90 for growth, optimally 0,94. Because of this requirement, Chaetomium sp. is regarded as a tertiary coloniser, like others high Aw-fungi such as Stachybotrys, Alternaria, Fusarium and Ulocladium.

Perithecia showed densely haired surfaces and the shape of perithecia varied from globose to subglobose. The ascospores released inside the perithecium were seen oozing out from osteole like cirrhus. Under SEM, the shape of perithecia could not be ascertained, as they were densely covered with stiff hairs having depositions. Ascospores under SEM were lemon shaped, smooth surfaced with apical papillae. Chaetomium colonies are rapidly growing, cottony and white in color initially. Mature colonies become grey to olive in color. From the reverse, the color is tan to red or brown to black. 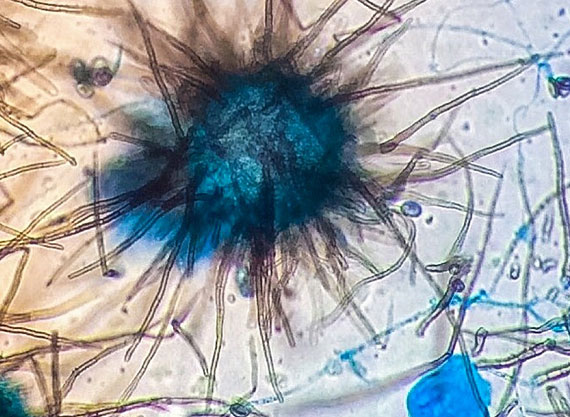 Exposure to Chaetomium is of the worst of compared to all other species. It is allergenic; a vast amount of medical news has been reported regarding Chaetomium. Chaetomium spp. is among the fungi causing infections wholly referred to as Phaeohyphomycosis, a fungal infection caused by a number of brown-pigmented fungi. Fatal deep mycoses (fungal infections) due to Chaetomium have been well documented. Brain abscess, peritonitis (infection of the peritoneum, the tissue lining the inner wall of the abdomen), cutaneous lesions, and onychomycosis (fungal nail infections) may develop due to exposure. People who are exposed to Chaetomium may be predisposed to permanent neurological damage of the myelin sheath. Therefore, a noticeably high incidence of autoimmune diseases has been linked to exposure of this mold.

Aside from the spores Chaetomium produces that can be inhaled, it is also the mycotoxins that are toxic to one’s health.