There are 200+ species and ubiquitous in nature.

These are non-mold fungi, many of which are commonly found in outdoor air and often reflect outdoor conditions. Basidiospores found inside the home at high levels could be an indication of decayed wood in the home, as many basidiomycete fungi are wood-decay fungi.

Basidiospores noted on indoor spore trap samples most often represent the entrance of inadequately filtered outdoor air. Most indoor materials will not support the growth of these fungi.

Ubiquitous in nature; mainly found in gardens, forests, and woodlands. Basidiospores are moisture driven as their spores disseminate during rain or in times of high humidity. The presence of these spores at levels greater than those of the outdoor environment may be an indicator of fungal contamination and water damage inside a building. Inside buildings they can indicate the dry and brown rot of wood.

Basidiospores are one of the most commonly found molds. Often produces microbial volatile organic compounds that give the distinctive heavy, musty odor.

Basidiospores are the sexual spores produced by basidiomycetes including mushrooms, bracket fungi, and puffballs. Basidiospores show a wide range in size, shape, structure, and color; however, they are always single-celled and are frequently small, in the range of 5-12 m. The overall shape of basidiospores can be globose, elliptical, fusiform, nodulose, angular, or irregular. In addition, the basidiospores of many mushrooms and bracket fungi are asymmetrical due to the presence of a hilar appendage, which attaches the spore to the basidium. This attachment structure can be distinct or indistinct. Spore walls may be smooth or ornamented with spines, warts, or ridges. An apical pore is a common feature on many basidiospores and, when present, is generally visible in the light microscope. Basidiospore colors vary from completely colorless to various shades of yellow, golden brown, light brown, and dark brown to nearly black. Some basidiospores, such as those in the genus Ganoderma, have a transparent outer wall layer, while the inner wall layer is golden brown with spines. 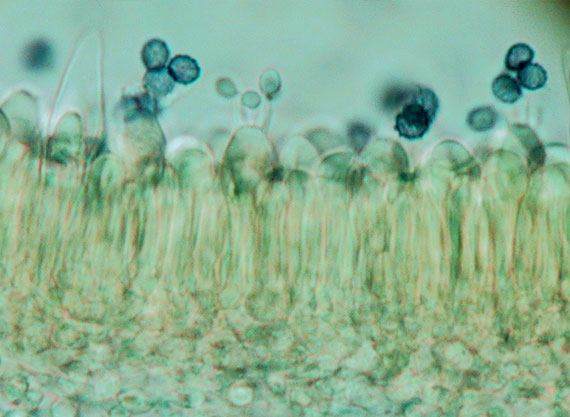 None identified at this time. Poisoning (toxicosis) is usually attributable to ingestion of mushrooms that produce the toxins. The potential toxin production is determined by individual species of this genus.  Not all toxins are produced by all species and the extent is highly dependent on environmental conditions.  List may not be all inclusive due to new discoveries in research.

Basidiospore spores have been documented in cases of hay fever, asthma, eczema, allergic alveoltis, Lycoperdonosis, fatigue, runny nose, sneezing, stuffy nose, plugged ears, and mushroom culture hypersensitivity. Typically, these symptoms apply more so to individuals genetic disposed to molds which is approximately 28% of the population. As this type is ubiquitous, significantly higher level compared to what exists naturally outdoors to yield reactions.

Little is known about illness caused by inhalation of basidiospores, although several species have been recovered from infected lung tissues in patients with compromised immune systems. This is not conclusive. It is rare that this mold is a pathogen that presents risk to humans.