It only seems natural that a man from the hometown of America’s first man in space would latch onto a space-age technology in helping design the world’s first self-disinfecting ambulance – Rather an automatic disinfection system.

“We have created the first ambulance on the planet with a fully functional immune system.”

Derry native Mark Brassard said he came up with the idea while peering into an ambulance at a trade show last summer. Last month, the first self-disinfecting ambulance rolled off the vehicle assembly line of Osage Ambulance Company in Linn, Mo.

Brassard, who has a background in renewable energy, had been studying the effects of atmospheric hydrogen radicals, also known as hydroxyls, on airborne and surface-borne pathogens. When he looked into the back of the ambulance at the trade show, he said he realized these hydroxyls could be used to keep both patients and emergency responders safe. 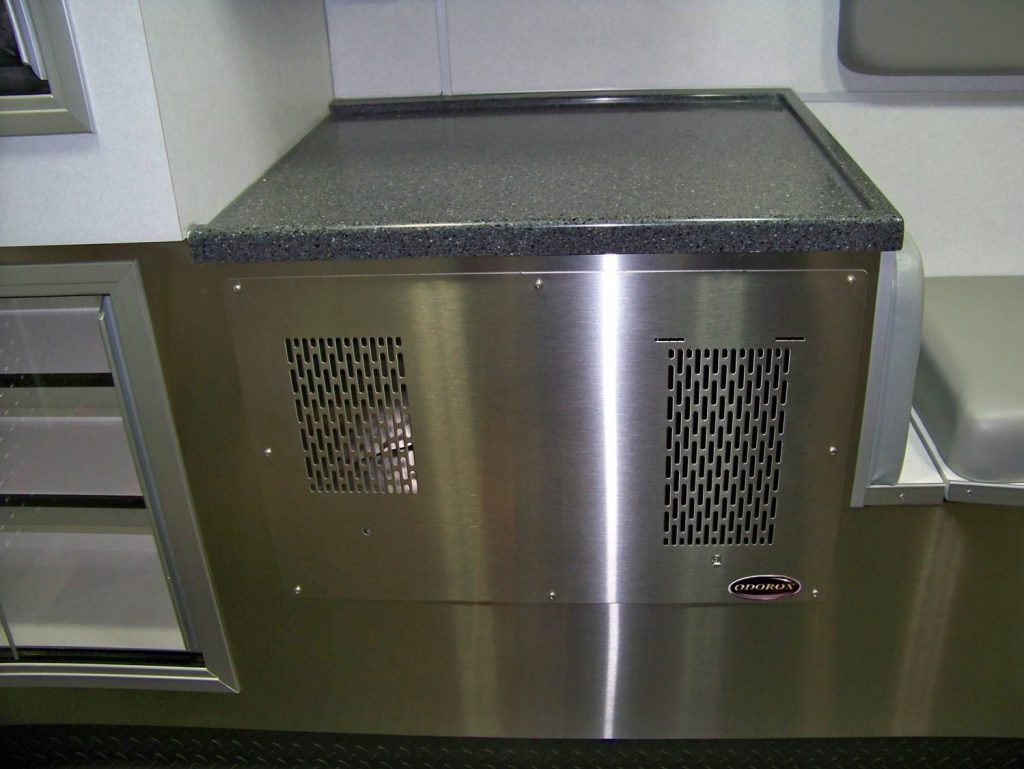 “I looked at all of the equipment, hoses, gauges, and dials inside the ambulance,” Brassard said.

“It dawned on me they were all places a virus or bacterium could hide and threaten human life.”

Microscopic hydroxyls are made of some of the smallest atoms in the universe and are capable of penetrating even the smallest nooks and crannies to disinfect and decontaminate.

Hydroxyls are made through the natural interaction of sunlight with moisture in the air. According to Brassard, hydroxyls are nature’s way of cleaning the environment.

“All of us know linens smell so much cleaner and fresher when hung outside to dry,” Brassard said. “That’s because of hydroxyls. They’re all-natural air and surface cleaners that are completely harmless to us, but they’re extremely effective against germs, mold and odors.”

The hydroxyl generator inside the ambulances is a technology that was pioneered by NASA, which first used one to disinfect and deodorize the interior of the space shuttle without using harsh chemicals.

The hydroxyl method is more efficient and less toxic than using typical cleansers such as bleach and ammonia, according to Brassard.

Even armed with the space age idea, Brassard said not everyone immediately jumped at the idea.

was the first one to take Brassard’s idea seriously.

“Mark came into the Cromwell booth and began sketching his idea of building a hydroxyl purifier into one of the ambulance cabinets,” Bashkoff said. “The idea made a lot of sense to me, and I understood the science behind it, but we pack a lot of unique equipment into our vehicles already. I didn’t know if the device could fit.”

Bashkoff said Brassard’s persistence paid off, as he measured and determined how the device could fit into the ambulance. The device combats germs and odors in the front and back of the ambulance.

“It goes up into the cabin of the ambulance and disinfects and sterilizes there, as well,” Brassard said. “The driver, as well as the person riding in the back, are protected.”

Brassard said several of the ambulances have been sold already, with the first one going to a community that had some of its fire and emergency equipment damaged during Hurricane Sandy.

He said he believes it’s only a matter of time before every ambulance has a built-in hydroxyl purifier and that the use of the technology will spread.

Because hydroxyls are effective against germs, yet harmless to pets, plants, and humans, Brassard said they will be used more in hospitals, restaurants, schools, day care centers, fitness clubs, office buildings, and homes in the near future.

The Science Behind Hydroxyls

The Dangers of Diesel Exhaust

Problems with Carbon Monoxide Sensors for the Home