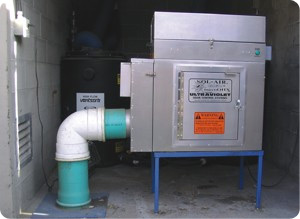 Hydrogen sulphide (H2S) based odours emanating from wastewater treatment plants and lift stations are not only a source of concern for operator safety, but are an extreme nuisance for homeowners or users of near-by public facilities or property. The negative publicity and hassle caused by persistent nuisance odour complaints are costly in both time and money for cities or industries that own the odour-producing infrastructure.

H2S, as well as numerous other odour causing compounds, is generated as a result of organic material decomposition in an anaerobic environment such as sewer force mains, lift stations, digesters, or wastewater treatment plant headworks.

The distinctive odour (rotten egg smell) of H2S gas is easily perceptible at very low levels (< 1 ppm in air). Exposure to moderate H2S levels (10-50 ppm) can cause headaches, dizziness, nausea and vomiting, coughing and breathing difficulty. Exposure to H2S levels above 50 ppm can result in severe respiratory tract and eye irritation and, in extreme cases, even death.

In addition to safety and nuisance odour concerns, the H2S can lead to the formation of sulphuric acid, which is very corrosive to all exposed steel and can lead to reduced life of concrete piping and structures.

Various technologies and processes such as ozone generators, chemical oxidizers (hydrogen peroxide, chlorine, etc.) activated charcoal filters, essential oils (masking agents), and biofilters have been used in an attempt to reduce H2S levels. Problems associated with these processes typically revolve around high capital or operation costs and, in some cases, limited effectiveness.

Our UV-based odour control system is a compact footprint process that utilizes patented multi–frequency Ultraviolet (UV) light. The technology harnesses the UV light in the UV-C and UV-V frequencies. Wavelength frequency is particularly “tuned” to produce highly radical hydroxyls, which rapidly oxidize a wide range of airborne odour producing compounds such as ammonia, H2S and mercaptans.

Ambient air is directed through the system’s UV chamber. The ultraviolet light acts as a catalyst, breaking down the ambient oxygen and water vapour molecules into O– and OH– (hydroxyl) radicals. These short-lived free radicals go on to oxidize the more complex molecules found in the contaminant, while the radicals themselves are used up in the process. The end result is a sequential and instantaneous gas breakdown with very little by-product, in the form of odour and elemental traces, but mostly simple, harmless CO2, water vapour, molecular oxygen, trace ozone, elemental forms of N, S, CL, and weak mineral acids.

Because of the way that UV reacts with the water in the ambient air (to form oxygen radicals), it is not necessary to pass the contaminated air through the unit. The hydroxyls formed by passing ambient air through the system are dispersed throughout the contaminated air, either by injecting them into a lift station, or by placing the unit inside an odour filled room in a wastewater treatment plant. In some cases, such as a gas collection system, the contaminated air may be passed through the UV unit, but since the process relies only on moisture in the air passing through the UV lamps, the method of treatment remains the same. In this way, a relatively small unit can treat the air in a large space, since a full air exchange is not required.

The UV process is easily adaptable for use in existing treatment plants or lift stations. It is also ideal in the treatment of odours originating in urban collection systems.

The Hydroxyl Generators have proved to be extremely effective in reducing odour levels in these situations. Within 10 seconds of the Generators being turned off, unpleasant odours returned.

For typical lift station applications, the footprint of the process requires less than one square metre of floor space. The unit can either be installed inside a building or, in most cases, the system can simply be set outside with treated air injection piping running to the lift station or manhole. A standard 30-amp 110V electrical service is adequate to operate all but the largest custom built units. The system does not require any on-going chemical costs or disposal of contaminated odour adsorption media.

A 13,000 m3/day wastewater treatment plant in Vernon, British Columbia, experienced citizen complaints regarding offensive odours. The headworks area and the trickling filter were identified as the sources of H2S.

The UV process proved to be extremely effective in reducing odour levels at these locations, at a fraction of the cost of other odour control technologies considered. Offensive odours were eliminated from the grit room/ compressor and the trickling filter.

The City purchased an eight-lamp UV odour control unit for the lift station. It was installed in an existing building, and brought the odour under control very quickly. Reduced odours were reported within minutes of turning on the system. Residents are back in their condominiums and odour complaints have ceased.

mr natural® is heavily invested in